I screwed up my first business venture. Writing about my failures is more difficult than I thought. But my blog is about sharing the things I find valuable and this is in that category.

We saw a problem and wanted to solve it.

As with most rural communities, farming is the primary source of income for us. Generations passed and the practice/methods haven’t changed. Case in point: my father still cultivates the same crop variety (in similar proportions) as that of my late grandmother. It is done as a means of survival as opposed to an avenue for sustainable income.

Having watched the stagnation of the farming practise, we decided to take matters in our hands. A ten-year mandate was actioned with two primary objectives. First was to help farmers become more efficient, the second was to help them scale their operations.

Despite having practised farming for years, we knew this goal was a BEHAG (Big Hairy Audacious Goal). The three of us never had the capital to plant the first large scale crop, not to mention starting such a project. But we had the will-power and the desire to execute.

That is when we decided to work backwards. First, we had an extensive discussion with two local manufacturers. We aimed to understand the challenges and requirements from a business perspective. This ultimately lead to a verbal agreement with one company - without planting a seed. Working backwards also involed relearning farming practises and various business model. While simultaneously obtaining the necessary skills and validating the business model. Thanks to Ash Maury’s book - Lean Startup, we had a template/framework used to validate the market and the feasibility.

Ok, this is not a formal document but this is our business model in short. It was broken down into three main stages, but this article will focus on the first. None the less here they are:

Before we got a verbal agreement with, we agreed to cultivate hot pepper. After doing extensive research, we ended up selecting this product for various reasons:

On that last point, we are fortunate to reside next to a spring/well that flows constantly. This made pepper the ideal crop. The crop not being too hard on the soil is another primary requirement. If we’re to maximize land usage, then the replenishment rate is the primary factor - this makes pepper the perfect crop for us.

We were fortunate enough to have all the required tools for free (water pump, irrigation system, tank). First, we inherited the drip irrigation system from an old farm close by. It was donated to us after they ended their multi-year operation. The water pump and tank were given to us by another farmer who ended is pig rearing. Over 600ft of PVC pipes was also sourced from the old drip irrigation system.

After which we quickly set up the system to pump water from the nearby well onto the property. In short order, we were able to not only source the pepper seedlings but also got the land prepared and ready for planting. In about four months we were planting pepper seedlings. In following the Lean Startup model, we decided to cultivate half an acre at first. Starting small will provide the flexibility to understand what is required. At this level, we were able to learn and iterate accordingly.

Challenge Comes In Many Forms

Before we started to plant the seedlings, we had an unexpected event. Thieves struck early. They stole about 200ft of the much-needed PVC pipe used to pump water on the farm. Word got out and in less than two weeks we able to identify the culprits and got the pipes returned. We couldn’t have done it without the help of the community members. Praedial larceny is not tolerated and the swift action by the community members sent a clear message. Besides this project would benefit them and help them improve their approach to farming. See picture of the pipes after we found them. 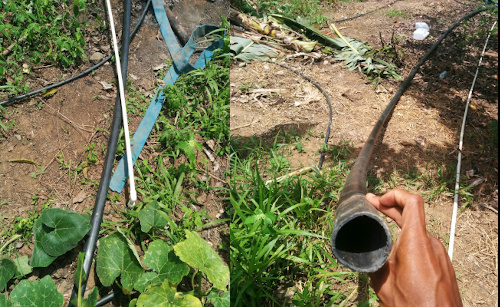 Managing the shrubs was another challenge we faced. We started out doing basic mulching and weeding out the shurb using manual labour. It became unbearable so we hired an assistant in controlling the weeds. Monitoring that guy became another headache.

Another was water consumption. Due to the intense heat in the summer, the plants required additional water. We ended up pumping 5x per/week in out 650 gallons Rhino tank. Purchasing gas for the pump became costly and so we had to pivot. We ended up adding mulch around the plant roots to reduce the evaporation rate. This workaround ended us saving on operational expenditure.

The half-acre grew and produced more than we anticipated. We were delivering at least 300lbs of pepper every two weeks. By applying a few best practises, we were able to maintain this yield for about 4 months. Production was high to a point where we oversupplied the customer - supply glut. As a result, I ended up seeking out another supplier. I tried my hands at marketing again and was able to secure a deal with a popular restaurant in Kingston. This was short-lived however we were grateful for the blessing.

For the most part, we did the right thing. Our customers were happy and the yield was exceptional. Having proven the concept, our next goal was to increase production and repeat the process. But this is where we didn’t do so well. I live and breathe this project, but I’m only able to operate on the farm on weekends because of my day job in Kingson. The second partner was having a challenge understanding the long term vision of the business. He resides closer to the farm, but his heart was not that close to the project.

Long story short, we ended up not expanding our operations and the project ended after the crop stopped. Our long term goal of helping farmers scale their operations fail to materialize. We had the right objectives, but our long term execution was found wanting.

I failed miserably. This is my first attempt at large scale farming and we didn’t even manage to reach the scaling part. I’m still passionate about farming, so I’ll be back at it - soon.

When the project stopped, it hit me hard. For weeks I thought about what I could have done better. Having seen the potential and the viability of the long term vision, it was hard to let go and consider it a loss. I still think about the days on the farm and how I wanted to achieve something great for my community. I saw this project as a tool we could use to help educate the younger generation that farming is an excellent career option. But I wasn’t able to execute on that mission. I love farming so I will try again - soon.